The "Cathedral in the Mountains"

The imposing parish church of San Giorgio contains the most important testimonies of Bagolino’s history.

Built in the 17th century in just three years by the architect G. Battista Lantana (1561-1627), it is the third largest in the Province of Brescia, so much so that it was called “Cathedral in the Mountains”.
Inside there are works by great artists such as: Titian, Tintoretto, Palma il Giovane, Torbido, Pietro Mera, collected there to witness the greatness of the Republic of Bagolino.

The frescoed vault was realized by Tommaso Sandrini, according to the taste and typical structures of the XVII century.
The high altar, by Abbot Gaspare Turbini, is majestic and elegant thanks to the ancient green marble embellished with golden bronzes.
The altarpiece, created by Andrea Celesti, shows the Holy Trinity at the top with S. Giorgio killing the dragon underneath. On the background, an airy and beautiful landscape creates an almost unreal and joyful atmosphere, typical of the 18th century.

The painting of the Madonna di San Luca is the work of one of the Madonna artists who settled in Venice and handed down this type of painting for several centuries (from the 14th to the 19th century).
According to G. Panzazza this painting dates back to the 15th century. He defined the work “one of the most refined examples produced in this field”.
The original painting is unveiled every 5 years with solemn ceremonies (The Feast of the Madonna) and what you normally see is only a copy. 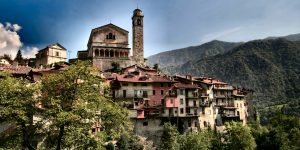 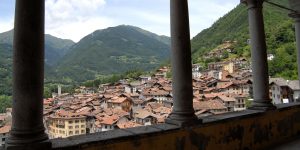 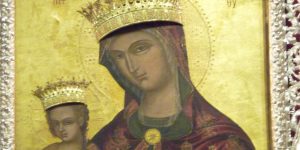