The Dancer stands out for his fanciful hat

Dancers and Players perform only on the last Monday and Tuesday of Carnival.

The felt hat, with a low dome, is covered with metres of red ribbon which is sewn and folded in a very special way, that only the women of the village know, forming ripples that give the hat its unique shape. Each hat is decorated according to tradition: friends and family gold are sewn to the red ribbon. Some old hats were decorated with rattles and mirrors.
To the left of the hat there is a large multi-coloured “bersagliera“ style bow, formed by many colourful ribbons.
The costume worn by the dancers is the common dark dress that the locals wore during the year and which is skilfully decorated during Carnival.

The trousers, knee-length, have side embroidery made with coloured ribbons.

The jacket is decorated with coils or trimmings sewn to form different embroideries. On the left arm there is a ribbon or a rosette.

On the shoulders there are large white cotton straps with toggles; this ornament was introduced only after 1915 because before the straps were simpler and the embroidery was formed by braid trims.
A wide silk, velvet or lace band, worn like a shoulder strap, from the right shoulder to the left side, ends with polychrome tassels, rosettes or bow. The hands are covered with white gloves.

The white handmade stockings, with red under socks, are fastened to the calf with “séntä” (local loom woven trimmings) ending at the edges with multi-coloured “mäsölinä” (tassels) in number of three+three, the shoes are black.

A large shawl with fringes fixed under the straps and knotted at the throat, falling down the back, completes the dress.

The dancers’ faces are hidden by an ivory canvas mask, devoid of expression.  To prevent the canvas from being soaked in sweat, the inside is greased with melted wax.  The mask is held in place by a scarf covering the head and neck.

THE “COMPANIES” OF THE DANCERS

In Bagolino the “Compagnie” of the Dancers were four and consisted of about 150 men.
Each group tried to be as numerous as possible and the “Compagnie”, in order not to disturb each other, danced in different streets. The Dancers could pass from one “Company” to another; the music was the same for everyone.
Today the “Companies” of the Dancers are two, one in the chief town and one in Ponte Caffaro.
Under the direction of one or two “Chief Dancers” they perform the “chosen ballads” each time. The “chief” calls the dancers to order by playing the brass cornet that he wears around his neck, announces the titles of the ballads and guides the company by giving out loud orders between one dance and the other.
Some elderly people believe that the typical orders addressed to women during the dances “en crus” (cross exchange of dancers). “co lä sò balàle” (dancing with one’s own “woman”), “en crus and balàle”  bear witness to a previous female participation in the dances.

Even if the dancers are all men with the face covered by equal masks, in order to distinguish  the role of men, “óm” or “capo“, from women “fómlä” or “figura“, the female masks wear two red spots called “poméì” painted on the cheekbones. When it is time for the dances the “Chief”, divides the “óm” and the “fómlä” and starts the dances.

The dancers begin their ballets at the Parish Church of S. Giorgio, where on Monday morning, at 06:30 a.m., a solemn religious ceremony finally opens the Carnival of the dancers, which then continues along the streets of the village stopping at specific places. In the past it was usual to perform three dances under the windows of one’s girlfriend or friends.
The dancers move their hands in a very personal and playful way that the people of Bagolino call “segnàcole“; this is in contrast with the movements and refinement of the dances that recall the court dances of the past centuries.

The musicians accompanying the dancers play guitars, violins, mandolin and double bass called “vädèl” (calf) as a joke.
Usually, they wear the traditional local costume; the head is covered by an “old” hat with a single ribbon wrapped around the dome top.

In the Carnival music, the violin is the instrument that dictates the leading melody of all the motifs.
The unique “lullaby” sound of the alternating instruments enables us to enjoy beautifully played pieces that are accompanied by the traditional art of interpretation, unique in its kind, usually in three voices: one low and two high. The sound is obtained mostly by “plucking” the first two mi-la strings, minus the third, never the fourth.

Apart from the explanations and the musical and formal analysis made by the experts to explain the origin of the dances and music of the Carnival, we would like to point out that the musical-choreutic origin of the Carnival of Bagolino is still to be discovered. It is assumed that the musical repertoire has its roots in continental Europe, and more precisely from the countries closer to us. The conjecture leads us to think that the ” stately” Carnival of the country – that of the dancers to be precise – would have inherited the instrumental practice from the musicians of Tyrol.
The composure with which the dances are performed would mimic, in a paradoxical form, ancient court dances, revisited and performed by the people of Bagolino in their own way.
And this should be the main feature that makes the bagossi dances special and unique. If these dances were performed in a common way they would have gone completely unnoticed and therefore could not have survived the years; on the contrary, they are still the central element of the bagosso Carnival. 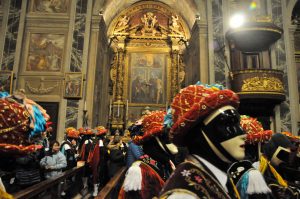 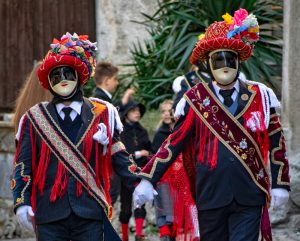 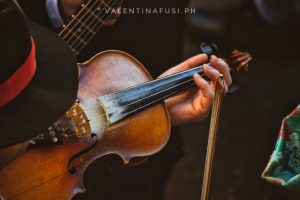 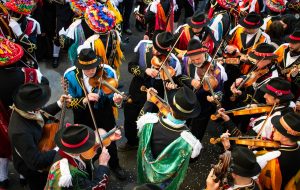