Bälärì and Màscär await you in an unforgettable atmosphere of music, dance and colors

Geographically isolated, Bagolino has been able to develop a centuries-old tradition known beyond the regional borders: Bagosso Carnival.
The attractions of this popular Carnival are represented by the “Bälärì” (the Dancers), the “Sonädùr” (the Players) and the “Màscär” (the Masks).
The music and dances at the heart of the festival can be considered, as mentioned by Sordi: “… a unique phenomenon in Italy with few equivalents throughout Europe that provides an impressive example of the level of complexity that a popular music culture can reach…”.

The feast that the Carnival proposes every year attracts not only the “bagossi” who have emigrated but also tourists. The carnival is felt by the people of Bagolino as their personal event in memory of centuries-old traditions. Spectators are welcome if they respect local customs.

To confirm how deeply rooted the carnival custom was, some excerpts from 16th century municipal documents still exist. In one, which dates back to 1518, we can read that the Municipality of Bagolino had made arrangements for the Company of Laveno, which came to the town to cheer up the carnival, to be rewarded with some cheese. It must be born in mind that at that time it was customary to exchange, between villages, mutual invitations on the occasion of festivities.
From the records of a pastoral visit in 1694, it appears that Bishop Giorgio Sigismondo Sinnersberg recorded some priests who “in carnival times, even wandered in disguise”.
Buccio, a 19th century fellow countryman, remembers that during his time Carnival was celebrated with great cheerfulness and that “directors” were elected with the task of ensuring that no troubles occurred.
At this festival, adds Buccio: “… the invitations were reciprocal … between the communities of Storo and Condino … even with mutual banquets that cultivated society, love, correspondence …”.
Don L. Zenucchini, curator of Bagolino, wrote in 1929 to the Salesian Missionaries of Ivrea “… The Carnival of Bagolino is characteristic and, although not approved by the ecclesiastical authority, for obvious reasons, however, for its very ancient tradition… it still continues, generally speaking, no harm is done… even seventy years old people wear masks…”.

According to the elderly, the Bagosso Carnival follows ancient and deep-rooted traditions expressed in those days by the local Dancers and Masks, and repeats itself unchanged over the years.
The Carnival winds along the streets of the village in the picturesque setting of old houses and “piäströi” (pathways) that in Bagolino still preserve their charm.
The Carnival overcomes appearances, overcomes the antagonism between faith and entertainment and involves the bagosso in first person.
And as Seccamani says, the bagosso makes those opposite behaviours or feelings its own, guards them and nourishes them because it has experienced millenary tribulations: “it has rooted in the conscience the stoical need to overcome events, to thaumaturgically veil the adversities of living, and particularly of living in a luxuriant but also isolated land”.
And so the pagan Carnival, felt and experienced as: “symbol of the forces of mysterious and irrational regeneration of existence or symbol of the lush propulsive season of youth,” merges and cohabits in the bagosso spirit, in perfect symbiosis with the firm, deep Faith, full of secular sufferings; it is the acceptance, in short, to live their daily Christian life. 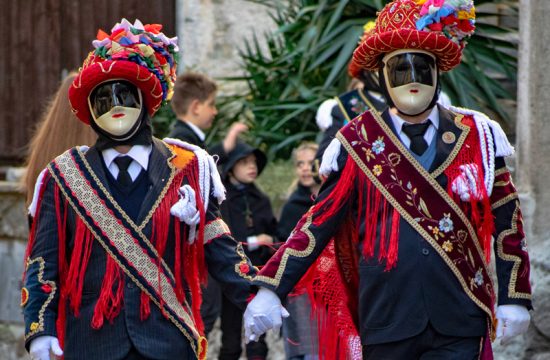 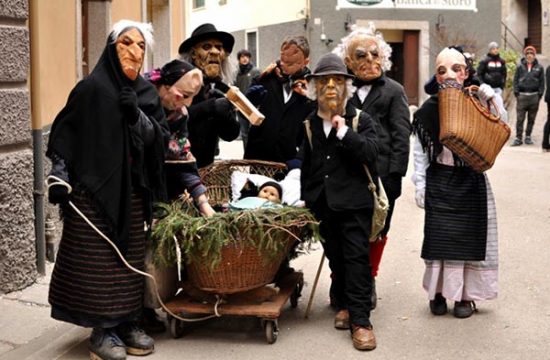